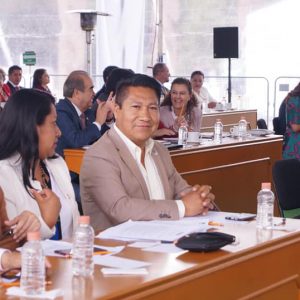 Alfredo Gonzalez is a Mexican Congressman and the owner of Peluches Alacrán, the factory where the Lingua Bear toy is fitted with electronic components and sewn. They are based in Xonacatlán, Mexico, a community located at the foot of the Sierra Nevada Mountains west of Mexico City. This small though vibrant town has made a name for itself internationally in plush toy production, out-competing China in some toy exports.

He received his law degree from the University of San Nicolás de Hidalgo and completed his MBA at Mexico Valley University, Toluca Campus. He is the Congressional Representative for the LX legislature of The State of Mexico; President of the Legislative Commission for Economic, Industrial, Commercial and Mining Development; member of the Hydraulic Resources, Cultural Education, Science and Technology, Civil Protection, Limited Territories of the State of Mexico and Municipalities Commissions; and chairs the Administrative and Social Communications Committees.